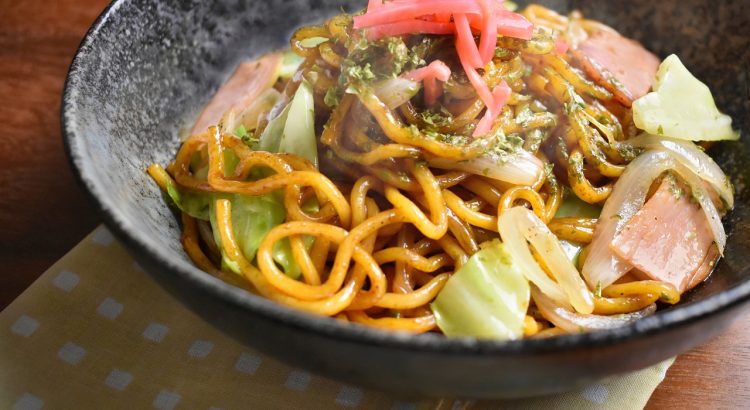 Yakisoba is a typical commoner’s food and is not fancy at all. It is not expensive so everybody can afford it. We have it for lunch or snack sometimes.

Yaki means pan fried. In this case, the soba in Yakisoba is not buck wheat noodle. It is a Chinese style noodle in Japan which is also called Soba. It is thicker than Chinese Chow Mein. However, in Canada, I use Chow Mein here when I make Yakisoba.

I think the most important ingredient in Yakisoba is Japanese worchestire sauce.

The Ingredients of Yakisoba are noodle, cabbage, thinly sliced pork belly or squid which is cut into small pieces, pickled ginger (beni shoga, not gari), flaky dried green seaweed, ketchup and worchestire sauce. It is very easy to cook.

First, fry the meat and cabbage with a little bit of oil. You can add squid if you want. Take them out of the pan. Add a little bit of oil in the pan and fry the noodles. In Japan, each store has its own special sauce, but I mix ketchup and worchestire together for my sauce. Coat the noodles with the sauce, then mix with cabbage and meat. Garnish with flaky dried green seaweed and pickled ginger. When you eat, add more worchestire sauce to taste. I like to eat the noodles drenched in worchestire sauce. Pickled ginger will give it a nice bite.

I always think about the Yakisoba store in my home town whenever I have this dish. The store is located in the corner of the supermarket near by my house. It is basic, with only cabbage and noodles. You have to pay a little extra if you want to have meat or squid. The owner who was working at the front stood in front of a big iron plate, always barking commands to a lady who chopped cabbage at the corner of the store. If you went to the store just before lunch, they would cook in front of you or you could buy a pre-cooked one.

In Japan, you can often see plastic containers filled with Yakisoba at lunchtime.