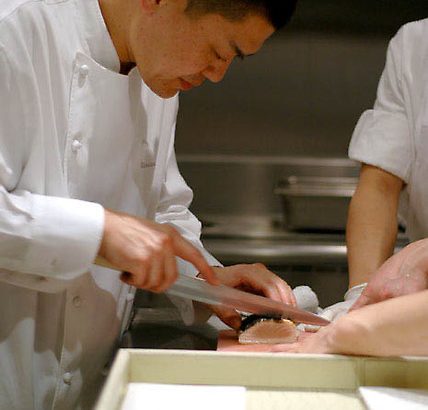 Tokyo-based chef Yoshihiro Narisawa is a famous chef known for his French-inspired cuisine. Narisawa has been awarded two Michelin stars and his restaurant, Narisawa, has also been voted Best Restaurant in Asia’s 50 Best Restaurants. His food is all about reconnecting us with nature, and his unique brand of ‘innovative Satoyama’ cuisine has made reserving a table at his restaurant in Minami-Aoyama one of the most sought after in Japan. The chef is an environmentalist and preserving the environment is of upmost importance to him. You’ll find his dishes invoke the thoughts of Japan’s fields, forests, mountains, and oceans

Narisawa’s father and uncle owned a bakery and tea salon, and as a youngster he enjoyed watching them spread happiness through their business and through food. He wanted to become a chef, and this desire and ambition led him to move to Europe at the age of 19 to pursue a culinary career. Narisawa would spend eight years working in some of the toughest kitchens in Italy, France, and Switzerland, picking up invaluable knowledge along the way. Some of the restaurant’s he would work in belonged to Frédy Girardet, Joël Robuchon, and Paul Bocuse. He was also inspired by Michel Bras, Pierre Gagnaire, and Alain Ducasse, chefs that created unique ‘nouvelle cuisine’ with the freshest local ingredients.

After seeing food and cooking as art and a way of expressing himself and his personality, Narisawa returned to Japan and opened his first French-inspired restaurant named La Napoule in Kanagawa Prefecture. It wasn’t until he opened his second restaurant, Les Creations de Narisawa, that he would really begin to develop the cooking philosophy that we know of him today.

Narisawa’s ‘innovative Satoyama’ is all about the relationship between people and the land.

In Japanese, Satoyama refers to the areas of human habitation between the mountains and grassland. In these areas, wildlife and plant-life is extensive, and Narisawa draws his inspiration simply from being near these areas. By simply being there, Narisawa can harvest his thoughts and feelings which allows his ideas to spring from the natural environment. At the core of his cooking concept is sustainability and responsibility. This is just as important to hi as the deliciousness of his food.

The chef’s ‘Bread of the Forest’ is a moist dough mixture placed into warm water that is gently heated at the table by candlelight. The natural forest yeast causes the dough to slowly rise, at which point it is transferred to a heated stone pot on a bed of twigs where the bread slowly cooks. Another unique dish is the Soil Soup, which is made with actual soil, burdoch root and water. The soil is filtered to remove impurities but the minerals remain present. One of Narisawa’s most luxurious dishes is his Hida wagyu beef rump roast, which is encased in a powder of carbonized leek to give it the appearance of a lump of charcoal. You see, every one of his dishes is reminiscent of something from nature. While you may associate this with poor tasting food, Narisawa’s creations are surprisingly tasty.

In 2013, Narisawa was voted Best Restaurant in Asia in 2013, and the chef himself was awarded with the Chef’s Choice award in Asia’s 50 Best Restaurants in 2018. He has also been awarded with two Michelin stars. While highy decorated, Narisawa’s goal is not to add more accolades to his resumé, but to discover more about his local environment and how to preserve it for future generations.

Narisawa is committed to using only organic and wild foraged ingredients.

This commitment leads him out into the wilderness, where he will spend as much time as he needs to search for ingredients such as herbs, plants, and soil. The chef keeps a close relationship with the farmers he works with. A heavy emphasis on seasonality is placed on Narisawa’s menu.